Researchers in the Flow Simulations and Analysis Group at George Washington University (GWU) and USA Swimming are using Tecplot to analyze the stroke cycles of elite swimmers to develop more effective training procedures based on a swimmer’s specific body profile. USA Swimming, the main governing body for swimming rules and training in the U.S., submitted full 3D body scans of Olympic swimmers Lenny Krayzelburg and Gabrielle Rose to the GWU team that would become prototypes of typical elite swimmers. 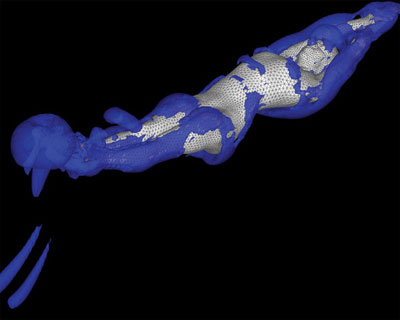 This image depicts isosurfaces of the magnitude of the imaginary part of the eigenvalues of the deformation tensor.  This gives a measure of the vorticity around the body, which is represented by a triangular unstructured surface mesh.  A ring of vorticity can be clearly seen as it is shed off the feet of the swimmer. Below are two Web Exclusive views that expand on Figure 1. 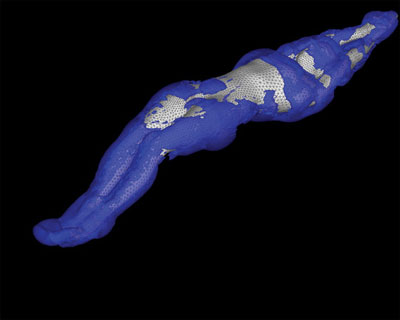 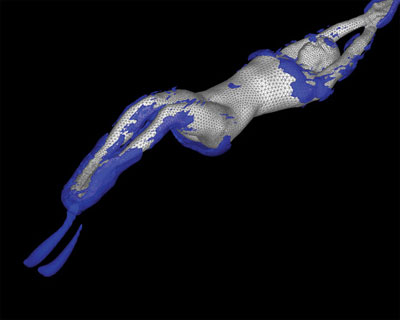 Rajat Mittal, Ph.D., is associate professor of mechanical and aerospace engineering and heads up the team of 10 researchers that make up the Flow Simulations and Analysis Group (FSAG) at GWU. The group’s primary focus is analyzing the physics of complex flows using numerical simulations. Alfred von Loebbecke, a graduate student and key researcher in the project, says the group is motivated by the quest to answer fundamental questions as well as specific flow-related issues encountered in practical applications. The simulation of complex flows often requires specialized computational tools and the development of such tools is another important area of focus for the research group. 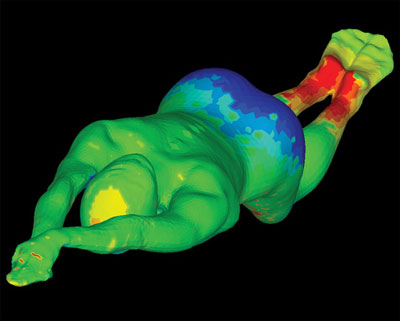 Dr. Mittal first began using Tecplot in 1991. In combination with the FSAG’s proprietary Navier-Stokes immersed boundary solver called VICAR3D, Tecplot is being used to analyze complex datasets for research projects that range from analyzing MEMS (microelectromechanical systems) microjets that can produce fluid jets to dragonfly wing aerodynamics. The group collaborates with many outside partners, including NASA, the U.S. Army Research Office, the Office of Naval Research, the Air Force Office of Scientific Research, and the National Institutes of Health.

Understanding the Fluid Dynamics of Swimming

In 2003 Mittal approached Russell Mark, the biomechanics coordinator at USA Swimming, to find out if USA Swimming would be interested in collaborating on a research project that leveraged some of his ongoing research for the Navy. The Navy project involved development of a CFD code for examining the fluid dynamics of swimming fish that was well suited for simulating human swimming as well. USA Swimming agreed and provided Mittal and his team with the athletes’ body scans. 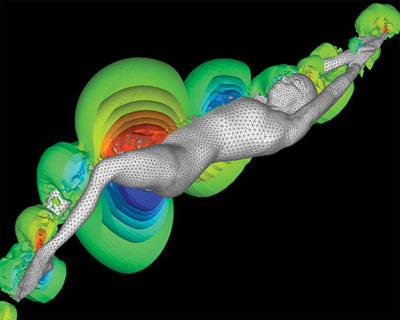 In this ongoing three-year project, the team is analyzing the fluid dynamics of the dolphin kick, a strategically crucial underwater maneuver permitted at the beginning of each lap after the swimmer turns at the end of the pool. Underwater swimming—when it mimics the rhythmic undulation of the dolphin—is now understood to be more efficient than surface swimming.

Alfred uses Alias Maya software to create an animation that basically matches the 3D body scans, frame by frame, to video of the dolphin kicks of two Olympic swimmers, Natalie Coughlin and Michael Phelps. Both swimmers have dolphin kicks that have helped earn a slew of medals between them. 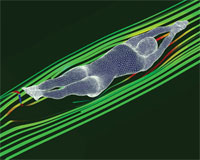 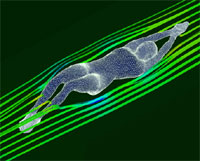 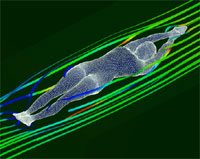 "The goal of this project is to understand what makes swimmers like Phelps and Coughlin such great dolphin kickers," says Mittal. "They usually come out of the water half a body length or more ahead of the competition. We’re trying to understand the fluid dynamics behind this."

How George Washington Researchers Use Tecplot

To create the animation, von Loebbecke breaks one dolphin kick into 32 frames, which are then used as input for the VICAR3D code. The CFD software interpolates between those 32 frames and creates 2,000 or more frames, which are then used to create the flow simulation. An unstructured mesh is generated for the processed body-scan data, and is then analyzed to produce both static and dynamic simulations. The simulations are completed on FSAG’s three 16-CPU Beowulf clusters, each comprised of 2.8GHz Pentium IV CPUs with approximately 16GB of memory.

Researchers used Tecplot to more closely examine the 3D vortex topology of the flow around the swimmer’s body resulting from the simulations. The animated isosurface plots, which were created using contour and isosurface manipulation, enable engineers to better understand the complex fluid dynamics involved as well as the precise motions and fluid features that lead to the generation of propulsive forces by the kicking swimmer.

"To do that," says Mittal, "we look at the plots created in Tecplot that show the surface contours of pressure on the 3D surface of the body to determine where the high- and low-pressure zones are that create the thrust. Is it the legs? Is it the toes? Or is it the thighs?"

One result of the project might be computer-calculated instructions for the mechanically perfect stroke, the one that science has determined will produce the lowest turbulence, the optimal arrangement of invisible eddies, and the swiftest route through the water.

"Fluid dynamics is one of the most visual of all engineering fields, not just because fluid flow oftentimes produces beautiful and complex patterns," says Mittal, "but because visualization is key to understanding fluid dynamics. That is why Tecplot is very crucial to us. It’s really the only way we can take apart many of these complex flows and study them. 3D flow fields are an order-of-magnitude more difficult to understand than 2D flows and so anything you can do to dissect these flows is tremendously helpful."

Aside from its excellent visualization capabilities, Mittal says that Tecplot also provides an effective means of debugging code. When trying to find a bug, the researchers will often use Tecplot visualizations to quickly pinpoint problems. "We use Tecplot as much in the debugging phase as we do in the post-processing phase," says Mittal.

He says the software’s greatest strength is that it enables him to do everything from simple x, y plots to complex 3D surface contours—all in one package. He also credits Tecplot for its ability to run well on all platforms (Windows, Linux, UNIX-based machines) as well as its user-friendly menu system.

Mittal says he believes Tecplot has significantly increased the ability of his team to understand the complexities of fluid behavior. "Tecplot has provided an incredible boost to our productivity in terms of our research output and the insights we are able to obtain."