UGS Corp, a leading global provider of product lifecycle management (PLM) software and services, today announced that JCB, one of the world’s leading construction equipment companies, is using its NX™ digital product development system to design and develop the JCB444-LSR diesel engine which will be used by JCB in its attempt to set a new land speed record for diesel vehicles this August.

The record attempt will be made in a nine meter long JCB DIESELMAX car, driven by Wing Commander Andy Green. Green, who set the first-ever supersonic world land speed record at 763.035 mph, will make the record attempt on the famous Bonneville Salt Flats in Utah. 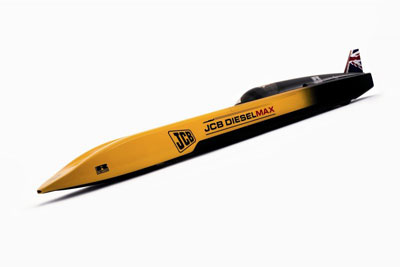 The project will underscore the strength, performance and versatility of the JCB444 diesel engine, originally created for use in JCB’s construction vehicles. Two turbo-charged, high performance versions of the JCB444, developed to produce 750 bhp, will power the JCB DIESELMAX.

Working with technology partner, Ricardo Consulting Engineers, JCB’s design engineering team called on the powerful design and modeling functionality of NX throughout the product development process for the JCB444. NX supported the creation of the initial concept designs and enabled the development team to take these early ideas through the rigorous virtual and physical testing process to produce the finished complex 3D model of the engine that ultimately informed the manufacture of final components.

Facilitated by NX’s advanced assembly techniques, up to twenty design engineers were able to work simultaneously on the development of the engine at any one time. All the components making up the eventual 3D model of the engine were incorporated into a single assembly file. Changes made to specific component designs by individual engineers would be visible to every other engineer, helping to ensure that the interrelated parts would ultimately fit together. 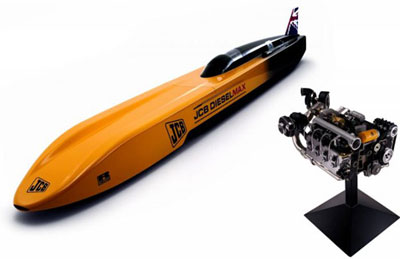 Predictive techniques and simulations were used to ensure accuracy, avoid re-work and ensure the successful development of the engine. NX’s 3D animation sequences enabled the design team to analyze the motion and sweep of the engine parts and data from the NX 3D model helped to replicate and understand the forces on different components. Computational fluid dynamics (CFD) simulated the flow of gases through the engine. Each phase of virtual and real world physical testing produced refinements and iterations and NX’s parametric facilities gave the design engineers the flexibility to make fast edits to the 3D model. Because NX links the different elements of the design, edits made to individual component designs automatically generated the corresponding changes to interrelated parts.

Alan Tolley, JCB’s director of Engine Programs commented on NX’s role in the development of the JCB444, saying “We set out to create an innovative, high performance, diesel engine built to power our construction equipment. This summer we will put the engine’s extreme capability to the ultimate test when we bid for the diesel land speed record.. The NX software’s advanced assembly features allowed us to keep up to twenty engineers working simultaneously on the project. The integrity and accuracy of the NX data allowed us to rely on it throughout the comprehensive testing phases and the parameterization facilities gave us the flexibility to work in an iterative way, making rapid edits as the engine evolved.” 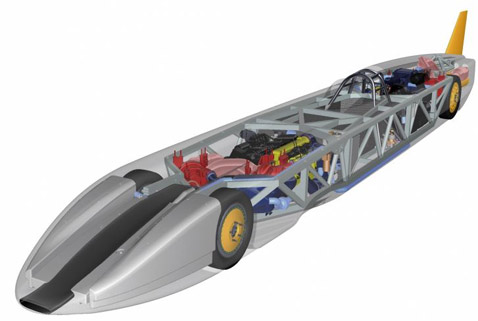 The JCB DIESELMAX, which has been specifically constructed for the record attempt, is twice as powerful as a Formula One car and twice as fast as a Grand Prix machine yet weighs four times as much. The car has been designed by a team led by Dr. Tim Leverton, JCB Group engineering director. Richard Noble, the former land speed record holder, acted as a consultant on the project.

Speaking of the world record attempt, Dr. Leverton said, “We began this project with one basic aim, to prove our engine. To power the world’s fastest diesel car with two JCB engines designed for our construction machines will be a huge achievement.”

“UGS is committed to helping organizations transform the process of innovation,” said Paul Vogel, senior vice president and managing director for UGS for Europe, Middle East & Africa. “The involvement of NX in the design and development of the JCB444, which is now the basis of a high profile world record attempt, is an excellent example of how our technologies are supporting leading companies that bring innovative products to market.”

UGS is a leading global provider of product lifecycle management (PLM) software and services with nearly 4 million licensed seats and 46,000 customers worldwide. Headquartered in Plano, Texas, UGS’ vision is to enable a world where organizations and their partners collaborate through global innovation networks to deliver world-class products and services while leveraging UGS’ open enterprise solutions, fulfilling the mission of enabling them to transform their process of innovation.